An iceberg twice the size of Manhattan has broken free from Greenland.

An iceberg about twice the size of Manhattan has broken free from Greenland's massive Petermann Glacier. Scientists say the event could speed up the march of ice into northern waters. This is the second time in less than two years that the Petermann Glacier has calved a monstrous ice island. Previously in 2010, it unleashed another massive ice chunk into the sea.
The latest break was observed by NASA's Aqua satellite, which passes over the North Pole several times a day, and was noted by Trudy Wohlleben of the Canadian Ice Service.
"At this time of year, we're always watching the Petermann Glacier," Ms Wohlleben said, because it can spawn big icebergs that invade North Atlantic shipping lanes or imperil oil platforms in the Grand Banks off Newfoundland. A large piece of the 2010 iceberg did just that, but caused no damage, she said.
NASA images showed the iceberg calving - breaking off from a floating river of ice called an ice tongue - and moving downstream along a fjord on Greenland's northwest coast. A rift in the ice had been identified in 2001, but on Monday a crack was evident.
On Tuesday, the satellite spied a bigger gap between the glacier and the iceberg, and the ice chunks further downstream were breaking up, NASA said.
The movement of this huge amount of ice into open water is not expected to have an immediate impact on sea levels, since this ice was already part of an ice shelf that was attached to land.
Arctic oceanographer at the University of Delaware, Andreas Muenchow said climate change is a factor in the current state of the Petermann Glacier. He said the glacier is as far back toward the land as it has been since the start of the Industrial Revolution more than 150 years ago. 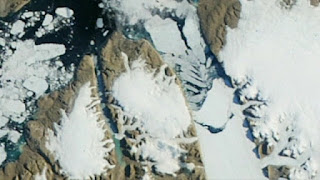